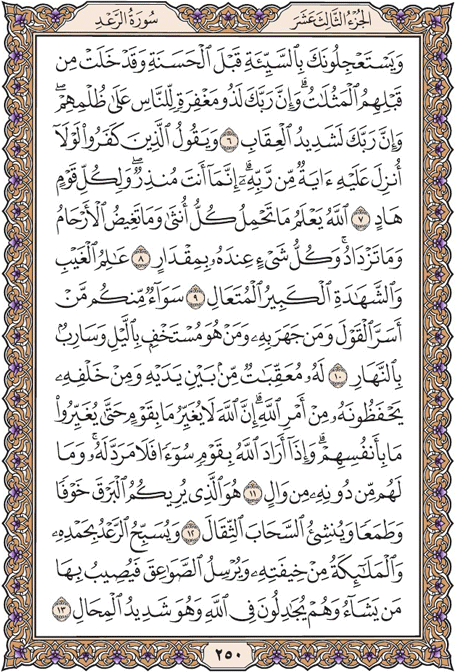 They want you to hasten the evil before the good, even when there have been examples of retribution before them. Though certainly your Lord forgives human beings for their iniquities, your Lord is severe of retribution.

The unbelievers say: "Why no miracle was sent down to him by his Lord?" But you are only a bearer of warnings, and a guide for every nation.

God is cognisant of what every female carries in her womb, or what the wombs want or exceed (of their disburdening time). With Him all things are in determined measure.

He is the knower of the known and the unknown, the mighty and most high.

He who keeps his secret among you is the same to Him as he who speaks out publicly, and he who hides himself in the night and walks freely in the day.

His angels keep watch over him in succession (night and day), in front and behind, by God's command. Verily God does not change the state of a people till they change themselves. When God intends misfortune for a people no one can avert it, and no saviour will they have apart from Him.

It is He who makes the lightning flash for fear and hope, and raises massive clouds.

The thunder sings His praises, and the angels too, for awe of Him. He sends thunder-bolts and strikes whosoever He will with them: Even then it is God they contend about! But mighty is He in (His) power.