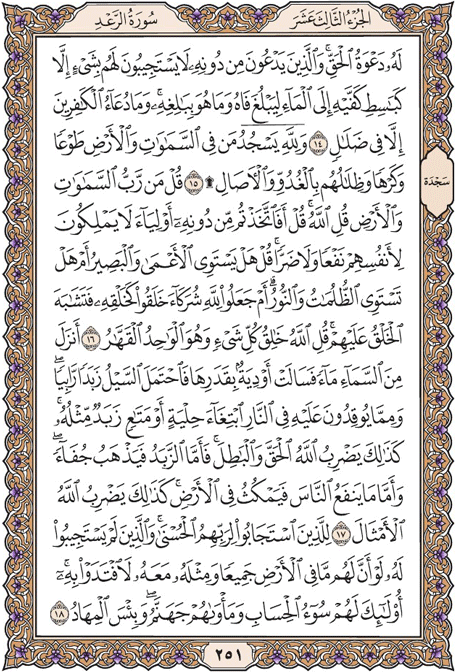 To call on Him is true (supplication). For those they invoke other than Him do not answer them at all, except like a man who stretches his hands towards the water that it reach his mouth, but it will never reach it. Not more than error are the prayers of infidels.

Whosoever is in the heavens and on earth bows to God in submission with a will or perforce, as do their shadows in the morning and evening.

Ask them: "Who is the Lord of the heavens and the earth?" (They will) say: "God." Say: "Then why do you take protectors besides Him who have no power over their own gain or loss?" Say: "Can a blind man and one who can see be equal? Or, darkness and light be the same? Or, have those they have appointed equal of God created, as He has created, so that the (two) creations look alike to them?" Say: "God is the creator of everything. He is One, the omnipotent."

He sends down water from the skies, which flows in channels according to their capacity, with the scum borne on the surface of the torrent, as rises the scum when metals are heated on the fire for making ornaments and household utensils. This is how God determines truth and falsehood. The scum disappears like the foam on the bank, and that which is useful to man remains on the earth. That is how God sets forth precepts of wisdom.

For those who obey their Lord is excellence. For those who fail to obey, the reckoning will be hard, even if they possess and give as ransom all that there is on the earth, and as much more; and Hell will be their abode: How wretched is its wide expanse!