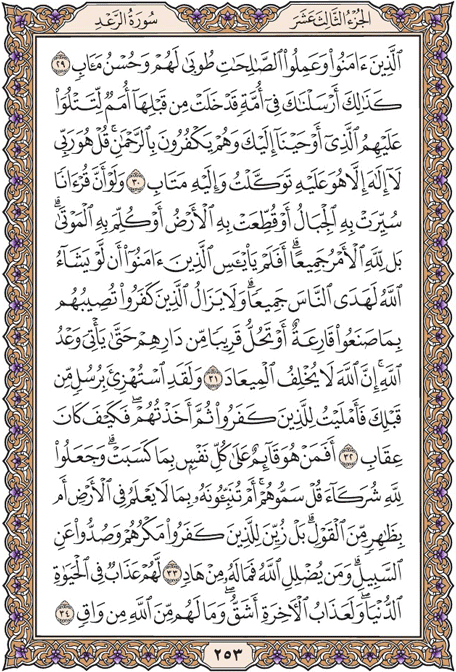 Those who believe and do the right, have happiness, and an excellent resting place.

That is how We have sent you to a people before whom many a people have come and gone, so that you may announce to them whatever We have revealed to you. But they do not believe in Ar-Rahman. Tell them: "He is my Lord. There is no other god but He. In Him have I placed my trust, and to Him is my reversion."

Had there been a Qur'an which could have made the mountains move, or the earth to cleave asunder, or the dead to speak, yet all authority belongs to God. Have the believers not learnt that if God had so willed He could have guided all mankind? As for unbelievers, they will be visited by misfortune endlessly for what they have done; or it would sit in their homes till the promised threat of God comes to pass. Surely God does not go back on His promise.

Many an apostle have they mocked before you; but I allowed the unbelievers respite, then I seized them. How severe was My punishment then!

Who is it who stands (watch) over every soul for what it does? Yet they ascribe compeers to God. Say: "Then name them. Or are you announcing to God what He does not know on the earth? Or is it only empty talk? In fact, the unbelievers' plots are made to look attractive to them, so that they are held back from the right path. Whosoever God allows to go astray has none to show him the way.

For them is punishment in this world; and the punishment of the world to come is far more severe. They will have no one to save them from God.