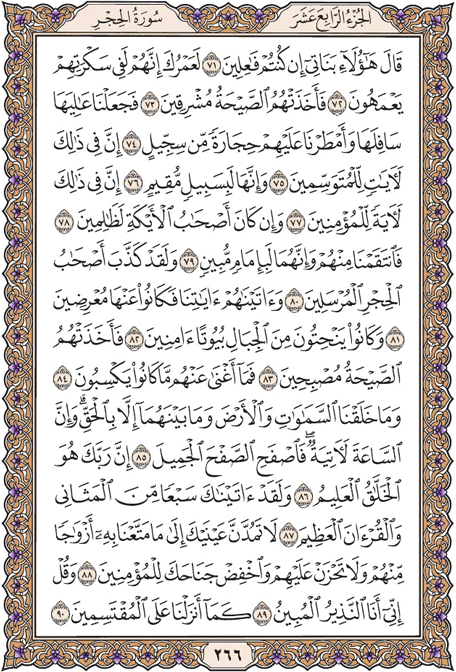 "Here are my daughters," said Lot, "if you are so active."

Verily by your life they were utterly confused in their (lustful) drunkenness.

So they were seized by the mighty blast at break of day;

And We turned the city upside down, and rained on them stones of hardened lava.

Herein are really signs for those who discern.

This (city) lies on a road that still survives.

Indeed there is a portent in this for those who believe.

The dwellers of the Wood (near Midian) were also wicked.

So We punished them too. They are both situated by the highway, clearly visible.

The people of Al-Hijr denied Our apostles;

And though We had given them Our signs they turned away from them.

They used to hew dwellings in the mountains to live in security.

But they were seized by the mighty blast towards the morning;

And all that they had done (for security) availed them nothing.

We have not created but with reason the heavens and the earth and all that lies within them. The Hour (of the great change) is certain to come. So turn away (from them) with a grace.

Surely your Lord is the Creator and knows (everything).

We have indeed given you the seven oft-repeated (examples), and the majestic Qur'an.

So covet not things We have bestowed on a portion of them to enjoy, and do not grieve for them, and protect those who believe;

And say: "I am a distinct warner,"