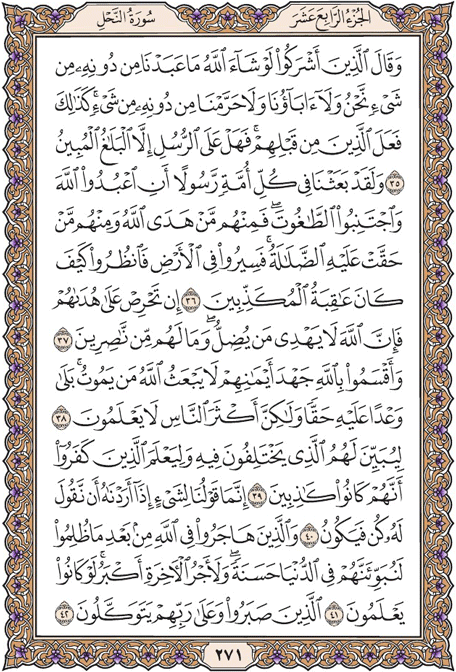 The idolaters say: "If God had willed we would not have worshipped anything apart from Him, nor would our fathers have done, nor would we have forbidden any thing without His (leave)." So had the people done before them. Therefore it is binding on the prophets to convey the message in clearest terms.

To every community We have sent an apostle. (saying:) "Worship God, and keep away from all other deities." Thus some of them were guided by God, and ruin was justified on some. Travel over the earth and see what befell those who accused (the apostles) of lies.

Even if you are eager to guide them, God does not surely guide those who have gone astray: They will have no one to help them.

They swear emphatically in the name of God that God will not raise the dead. On the contrary, it is a promise incumbent on Him, though most men do not understand,

For (they fear) He might make what they differed about plain to them, and that the infidels may realise that they were liars.

Those who left their homes in the cause of God after having been oppressed, will be given by Us a better place in the world, and if they knew, the guerdon of the next would be greater

(For) those who persevere and place their trust in their Lord.