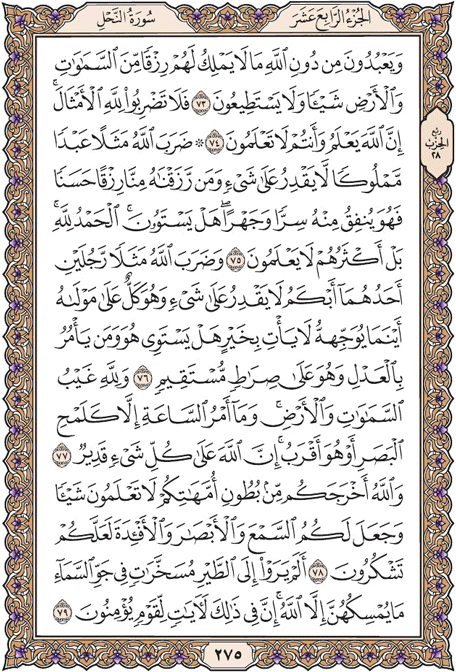 Yet they worship those apart from God who cannot provide for them any sustenance from the heavens or the earth, nor will they have power to do so.

So do not invent similitudes for God. Indeed God knows, and you do not know.

God presents the example of a man who is a hired servant with no power over anything, and another on whom We have bestowed a handsome fortune, who spends from it in private and in public: Can they be equal? Praised be God! But most men do not understand.

God presents another example of two men, one dumb and unable to do a thing and is a burden on his master. Wherever he is sent he returns without any good (result). Could he be equal to one who enjoins what is just, and follows the right path?

To God belong the secrets of the heavens and the earth, and the Hour of Doom is a matter of the winking of an eye, even less, for God has certainly power over all things.

God produced you from your mothers' wombs knowing nothing, but gave you ears and eyes and hearts so that you may be grateful.

Do you not see the birds held high between the heavens and the earth? Nothing holds them (aloft) but God. There are verily signs in this for those who believe.