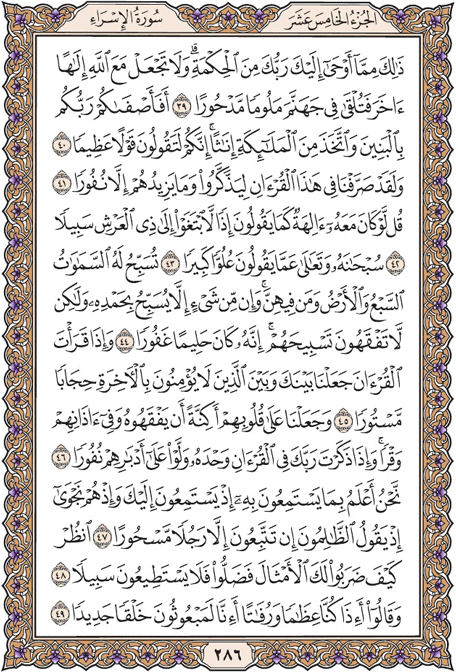 This is some of the wisdom your Lord has revealed to you. So do not take another god apart from God, or you will be cast into Hell, reproved, ostracised.

Has God chosen to give you sons, and taken for Himself daughters from among the angels? You utter grievous things indeed!

We have explained (the truth) in various ways in this Qur'an, that they may be warned; but it only increased their refractoriness.

Say: "Had there been other gods with Him, as they assert, they would surely have sought a way (of opposition) against the Lord of the Throne."

Too glorious and high is He, too exalted for what they say!

The seven skies, the earth, and all that lies within them, sing hallelujas to Him. There is nothing that does not chant His praises, but you do not understand their hymns of praise. He is verily clement and forgiving.

When you recite the Qur'an, We place a hidden veil between you and those who do not believe in the Hereafter;

And We put covers over their hearts and deafness in their ears that they should not understand it. So when you invoke your Lord alone in the Qur'an they turn their backs and walk away.

We know well with what (intent) they hear you, for when they confer privately the wicked say: "You follow but a man deluded."

See, what comparisons they coin for you, and go astray, and thus cannot find the way.

Yet they say: "When we are turned to bones and bits, shall we be raised as a new creation?"