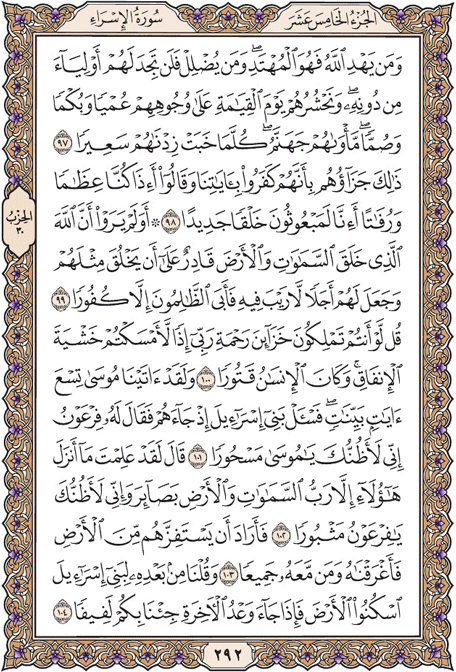 He is guided whom God guides. As for him He allows to go astray, you will not find a protector other than Him. We shall raise them on the Day of Resurrection in their own image, blind and dumb and deaf: Their habitation will be Hell. Every time (its fire) subsides We will intensify its flame.

This will be their retribution for having denied Our signs and said: "Once we are turned to bones and bits, can we be raised as a new creation?"

Do they not perceive that God, who created the heavens and the earth, has the power to create the like of them? There is no doubt that. He has fixed a term for them. Even then the wicked disdain everything but unbelief.

Say: "Even if you owned the stores of the mercy of my Lord, you would have held them back for fear of spending them, for man is niggardly."

We gave Moses nine clear signs; so ask the children of Israel. When (Moses) came to them the Pharaoh said: "I think, O Moses, you have been deluded."

He replied: "You know that none but the Lord of the heavens and the earth has sent these (signs) as cogent proof. I truly think, O Pharaoh, your days are done."

Then he sought to turn them out of the land, but We drowned him and all his followers.

After this We told the children of Israel: "Dwell in the land. When the promise of reckoning comes, We shall bring you together from a motley crowd.