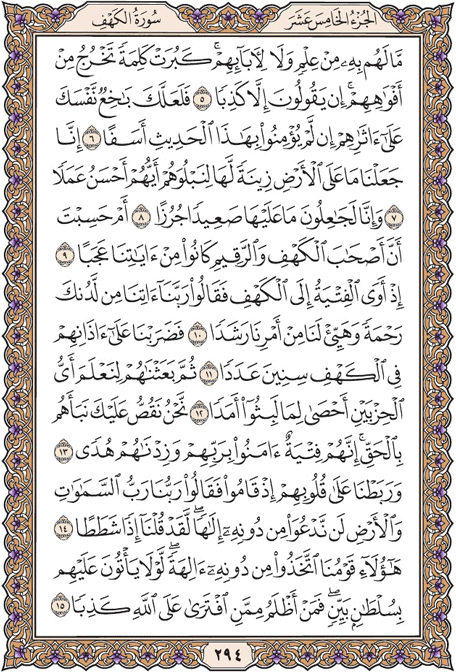 They have no knowledge of this, as their fathers did not have. How terrible are the words they utter! They speak nothing but lies.

Will you kill yourself for grief of them if they do not believe in this presentation?

We have made whatever exists on the earth its adornment to test and try them (and) know who acts better;

For We shall certainly turn it to barren dust.

Do you think the men of the cave and Ar-Raqim were so strange among Our signs?

When those young men took shelter in the cave, and prayed: "O Lord, grant us Your favour and dispose our affair aright,"

We sealed off their ears in the cave for a number of years,

Then roused them to ascertain which of the two groups could account for the period they had stayed.

We narrate their story to you in all truth. They were a few young men who believed in their Lord; so We gave them greater guidance.

And strengthened their hearts when they stood up and said: "Our Lord is the Lord of the heavens and the earth. We shall invoke no god beside Him, for we shall have uttered a blasphemy then.

As for these our people here, they have taken to other gods apart from Him. Then why do they not bring a clear authority for them? Who is more wicked than he who fabricates a lie against God?"