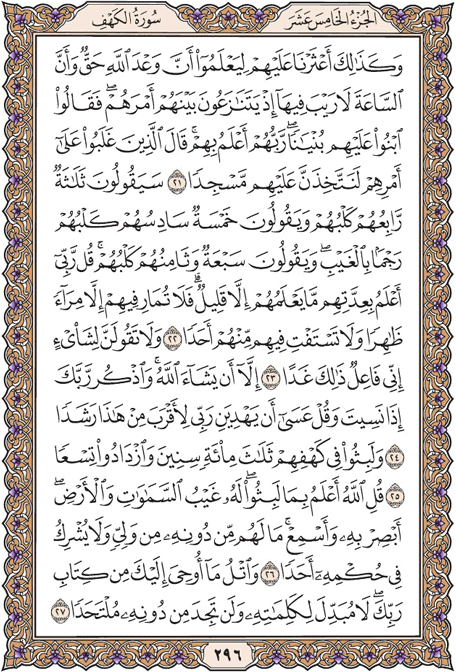 Thus did We inform the people about them that they may know the promise of God is true, and there is no doubt that the Hour will come. As they were arguing among themselves as to what should be done with them, (some) said: "Erect a monument over them. Their Lord is best cognisant of them." Those who prevailed, said: "We shall build a place of worship over their (sepulchre)."

Do not say of any thing: "I will do it tomorrow,"

Without (adding), "if God may please;" and think of your Lord in ease you forget, and say: "Perhaps my Lord will show me a nearer way to rectitude."

(It is said) they stayed in the cave three hundred years and nine.

You say: "God only knows how long they stayed. He alone knows the secrets of the heavens and the earth. How distinctly He sees and hears! They have no other guardian but Him, and He does not share His authority with any one."

Recite what has been revealed to you of the Book of your Lord. There is no one who can change the word of God; and you will not find refuge except in Him.