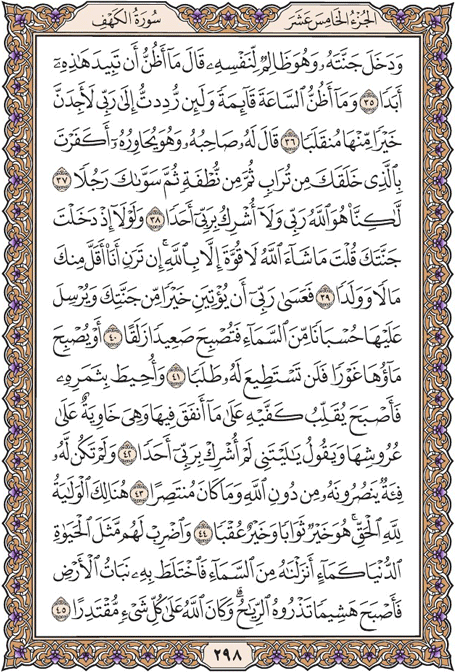 And he walked into his garden, and, (forgetting) his limit, said: "I cannot imagine that this will ever be ruined,

Nor can I think that the Hour (of Doom) will come, And even if I am brought back to my Lord, I will surely find a better place there than this."

Disputing with him, his companion said: "Do you disbelieve in Him who created you from dust, then a drop of semen, then formed you into a man?

And He is God, my Lord, and I do not associate any one with my Lord.

When you entered your garden, why did you not say: 'As God may please;' for no one has power except given by God? Though you see me poorer in wealth and children than you,

Yet, my Lord may haply give me a garden better than yours, and He may send a thunder-bolt, from the skies and in the morning it will be a barren plain;

Or else of a morning its water may sink underground, and you will not find a trace of it."

And his vines were overtaken (with disaster), and he began to wring his hands (at the loss) of what he had spent on them, for the vines had fallen upon their trellises; and he said: "Would to God that I had not associated any one with my Lord."

He had no body to help him other than God, nor was he able to save himself.

Present to them the example of the life of this world so like the water We send down from the skies that mingles with the earth to nourish its vegetation, which then on the morrow turns to stubble and is blown away by the wind. God has power over everything.