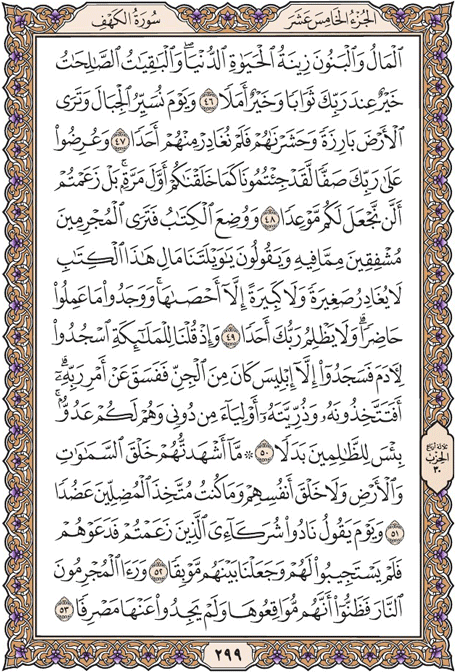 Wealth and children are only the gloss of this world, but good deeds that abide are better with your Lord for recompense, and better for expectation.

The day We shall move the mountains, and you see the earth an open plain, We shall gather them together, leaving none behind.

They will be arraigned before their Lord row on row, (and He will say): "Well, you have come to Us as We had first created you, even though you imagined We had fixed no time for this meeting."

The ledger (of their deeds) would be placed before them. Then you will see the sinners terrified at its contents, and say: "Alas, what a written revelation this, which has not left unaccounted the smallest or the greatest thing!" They will find in it whatsoever they had done. Your Lord does not wrong any one.

When We said to the angels: "Bow before Adam in adoration," they all bowed but Iblis. He was one of the jinni and rebelled against his Lord's command. And yet you take him and his offspring as your friends instead of Me, even though they are your enemies. How sad a substitute for the evil-doers!

I did not call them to witness the creation of the heavens and the earth, nor their own creation. I would not take as helpers those who lead (men) astray.

The day He will say: "Call those you had called My compeers," they will call them, but will get no response, and We shall place a gulf between them.

The sinners will see the Fire and know that they will be thrown into it and will not find a way of escape from it.