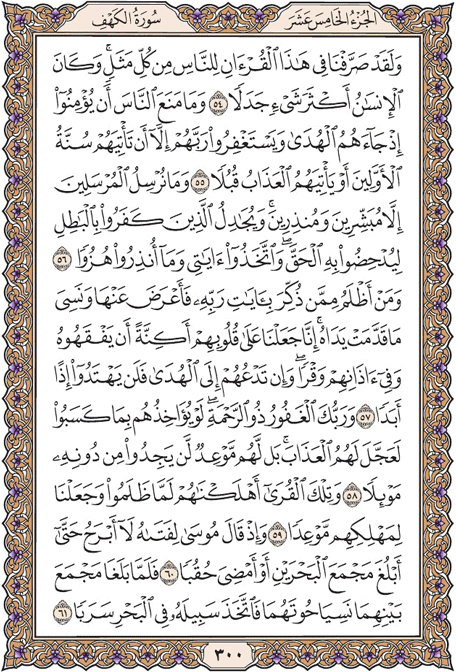 We have explained in various ways all things to men in this Qur'an; but of all things man is most contentious.

There is nothing to prevent men from believing when the guidance has come to them, and asking for their Lord's forgiveness, unless they want the example of earlier people visited upon them, or the punishment to appear right before their eyes.

We never send apostles but to convey happy tidings, and to warn. But those who disbelieve contend with false arguments to nullify the truth. They make a mockery of My revelations and of what they had been warned.

Who is more unjust than he who, on being reminded of his Lord's revelations, turns away from them, and forgets the evil deeds he had committed in the past. Verily We have placed a covering on their hearts so that they do not understand, and a deafness in their ears so that however you may call them to guidance they will never be guided aright.

But your Lord is forgiving, full of benevolence. If He had pleased to punish them for their doings He would have punished them immediately. But a term is fixed for them from which they will find no escape.

As for these habitations, We destroyed them only when they transgressed; even so We had fixed a time for their annihilation.

When Moses said to his servant (Joshua): "I will not give up till I reach the confluence of two oceans, or I will journey on and on."

When they reached the confluence they forgot the fish (they had brought as food) which swiftly made its way into the sea.