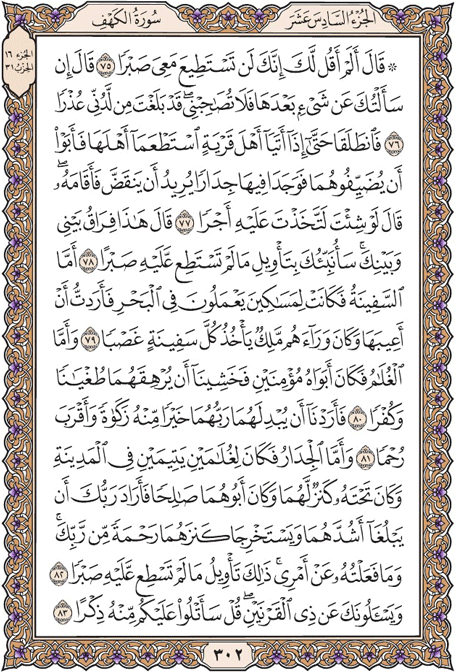 He said: "Did I not tell you you will not be able to bear with me?"

Moses said: "If I ask you any thing again then do not keep me with you. You have my apology."

The two went on till they came upon some villagers, and asked the people for food, but they refused to entertain them. There they found a wall that was crumbling, which he repaired. Moses remarked: "You could have demanded wages for it if you liked."

"This is the parting of our "ways," he said. "But I will now explain the things you could not bear:

That boat belonged to poor people who used to toil on the sea. I damaged it because there was a king after them who used to seize every ship by force.

As for the boy, his parents were believers, but we feared that he would harass them with defiance and disbelief.

We hoped their Lord would give them a substitute better than him in virtue and goodness.

As for that wall, it belonged to two orphan boys of the city, and their treasure was buried under it. Their father was an upright man. So your Lord willed that on reaching the age of maturity they should dig out their treasure as a favour from their Lord. So, I did not do that of my own accord. This is the explanation of things you could not bear with patience."

They ask you about Dhu'l-Qarnain.