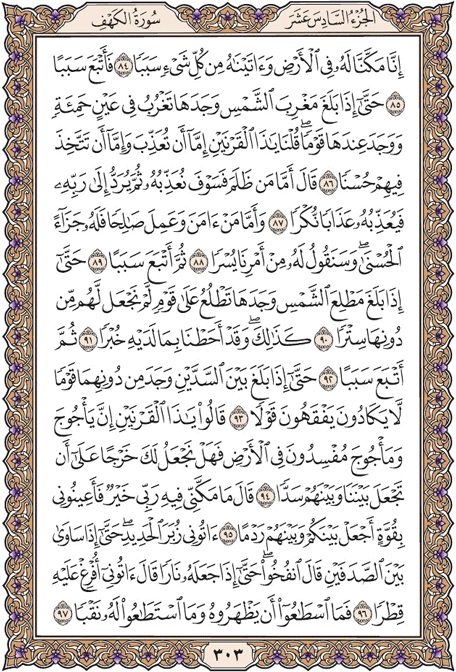 Say: "I will cite before you his commemoration." We gave him authority in the land and means of accomplishing every end.

So he followed a certain road

Till he reached the point of the setting sun, and saw it set behind a muddy lake, and near it found a people. We said: "O Dhu'l-Qarnain, you may either punish them or treat them with kindness."

He said: "I shall punish whosoever is wicked. He will then be sent back to his Lord who will inflict on him a terrible punishment.

But he who believes and does the right will have an excellent reward, and we shall make things easy for him."

He then followed (another) road

Till he reached the point of the rising sun, and saw it rise over a people for whom We had provided no shelter against it.

It was so, for We were fully informed about him.

He then followed (another) road

Till he reached a place between two mountains, and found this side of it a people who understood but little of what was spoken.

They said: 'O Dhu'l-Qarnain, Gog and Magog are oppressing the land. May we pay you some tribute so that you could build a rampart between us and them?"

He said: "The ability my Lord has given me is better. So help me with your manual labour; I will build a wall between you and them.

Bring me ingots of iron," (which they did) until the space between two mountain sides was filled up. "Blow your bellows," he said; (and they blew) until it was red hot. "Bring me molten brass," he said, "that I may pour over it."

Thus (Gog and Magog) could neither climb over it nor dig a hole through (the rampart).