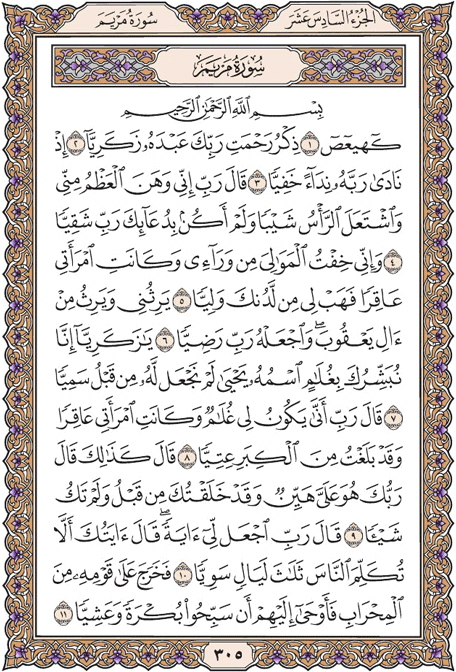 Commemorate the beneficence of your Lord on Zachariah, His devotee,

When he called to his Lord inwardly,

And said: "O my Lord, my bones decay, my head is white and hoary, yet in calling You, O Lord, I have never been deprived.

But I fear my relatives after me; and my wife is barren. So grant me a successor as a favour from You

Who will be heir to me, and heir to the house of Jacob; and make him obedient to You, O Lord."

"O Zachariah," (it was) said, "We give you good news of a son by name of John.' To none have We attributed the name before."

"How can I have a son, O Lord" he said, "when my wife is barren and I am old and decrepit?"

(The angel) answered: "Thus will it be. Your Lord said: 'This is easy for Me; for when I brought you into being you were nothing.'

He said: "O Lord, give me a token." "Though sound," He answered, "you will not talk to any one for three nights running."

So he came from the chamber to his people, and suggested to them (by signs) to sing the praises of the Lord morning and evening.