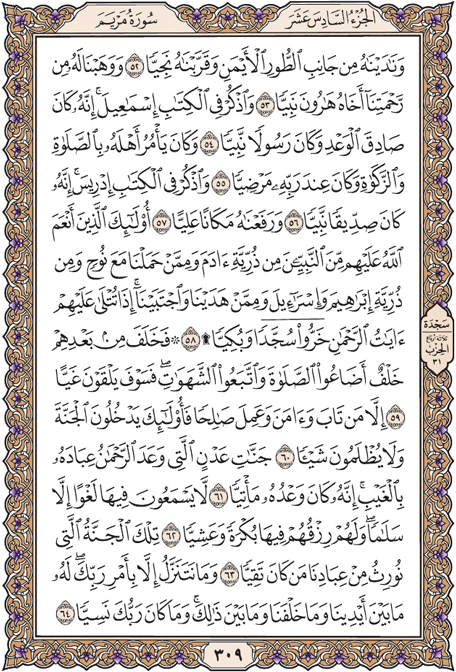 We called him from the right side of the Mount, and brought him close for communion;

And bestowed on him his brother Aaron, a prophet, through Our benevolence.

Commemorate Ishmael in the Book. He was true of his promise, and a messenger, a prophet.

He enjoined on his household worship and zakat, and he was obedient to his Lord.

Commemorate Enoch in the Book. He was a truthful person and a prophet,

And We raised him to an exalted station.

These are (some of) those who were favoured by God among the prophets of the progeny of Adam, and of those We bore in the ark with Noah, and the offspring of Abraham and Israel, and of those We guided and We chose, for they bowed weeping in adoration when the revelations of Ar-Rahman were recited to them.

But they are succeeded by a generation who neglect their devotional obligations and follow only earthly pleasures; but they will reach the wrong road and meet destruction,

Except those who repent and come to believe and do the right. These will enter Paradise and will not be wronged the least

In the gardens of Eden promised by Ar-Rahman to His creatures in the unknown (future). Verily His promise will come to pass.

They will hear no vain talk there, but only salutations of peace, and they will have their sustenance morning and evening."

This is the Paradise those of Our creatures will inherit who take heed and fear the displeasure of God.

"We do not come down," (will the angels say) "but only by your Lord's command." To Him belongs whatever lies before us and behind us, and the space in between. Your Lord does not ever forget: