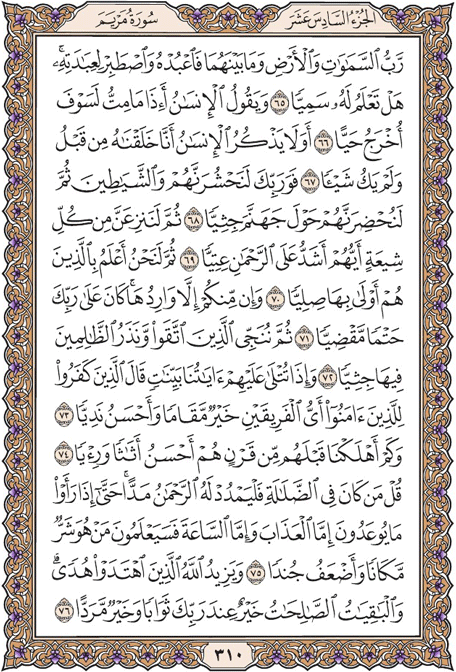 Lord of the heavens and the earth and all that lies between them. Therefore worship Him, and be constant in His worship. Do you know any namesake of His?

Yet man says: "When I am dead, will I come to life again?"

Does man not remember that before We created him he was nothing?

By your Lord, We shall gather them and the devils together, then bring them crawling on their knees around Hell.

We shall pull out of every section those who were most perversely rebellious against Ar-Rahman.

We know best who deserve to be burnt in (the Fire).

There is not one among you who will not reach it. Your Lord has made this incumbent on Himself.

We shall deliver those who took heed for themselves, and leave the evil-doers kneeling there.

When Our lucid revelations are read out to them, the infidels say to those who believe: "Which of the two groups is better in standing, and whose company is more excellent?"

How many generations that had far more wealth and ostentation have We laid low before them!

Say: "Ar-Rahman extends the life of those who are astray until they come to realise what had been promised them was either (physical) affliction or (the terror) of Resurrection. Then will they know who is worse in position, and who is weak in supporters.

God gives greater guidance to those who are guided; and good deeds that endure are better with your Lord for reward, and better for consequence.