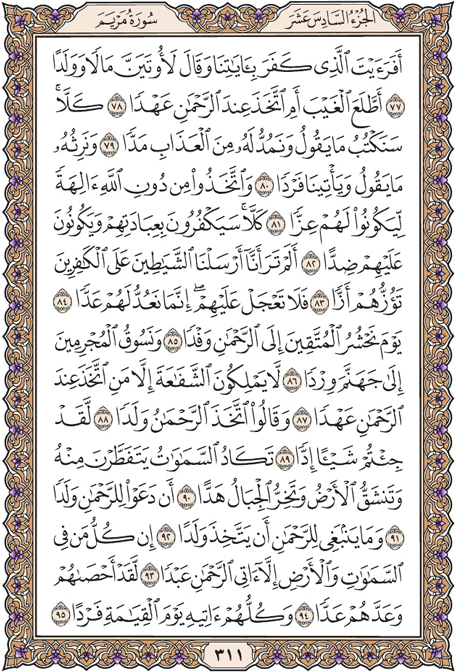 Have you seen him who denies Our revelations, and says: "I will certainly be given wealth and children."

Has he peeped into the Unknown, or obtained a promise from Ar-Rahman?

Never so. We shall certainly write down what he says, and prolong the extent of his punishment.

All that he claims will revert to Us, and he will come before Us all alone.

They have taken other gods apart from God that they might be a strength to them.

Never. They will deny their devotion and become their adversaries.

Do you not see that We have set the devils against the infidels to rouse and instigate them?

So, do not be hasty with them. We are counting their number (of days).

The day We shall usher the righteous before Ar-Rahman like envoys into the presence of a king,

And drive the wicked into Hell like cattle driven to water,

None will have power to intercede for them except one who obtains a promise from Ar-Rahman.

They say: "God has begotten a son."

You have uttered a grievous thing

Which would cleave the skies asunder, rend the earth, and split the mountains,

For they have attributed a son to Ar-Rahman,

When it does not behove the Merciful to have a son.

There is no one in the heavens and the earth but comes before Ar-Rahman in all obedience.

He has counted them and calculated their number.

Every one of them will come before Him all alone on the Day of Resurrection.