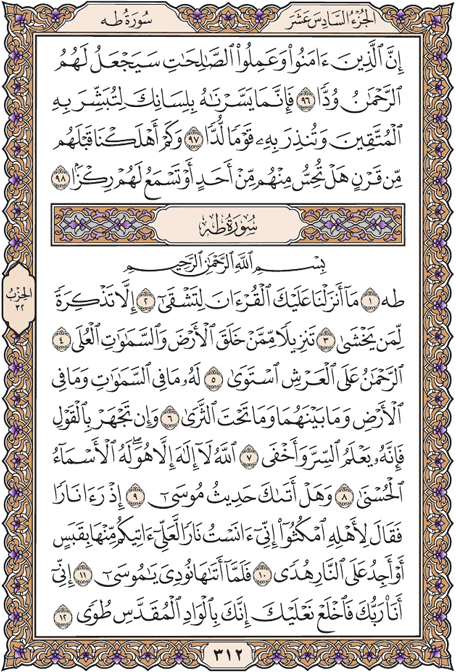 Surely Ar-Rahman will show love for those who believe and do the right.

So We have made this (Qur'an) easy in your tongue that you may give good news to those who take heed, and warn the people who are contentious.

How many generations have We laid low before them. Do you see any sign of them, or hear the least whisper of them?

We have not sent down the Qur'an to you that you should be burdened,

But as admonition for him who fears --

A revelation from Him who created the earth and the high ascending skies,

The ever-merciful, established on the throne (of authority).

Whatever is in the heavens and the earth and in between them, belongs to Him, as whatever lies under the earth.

Whether you say a thing aloud or inaudibly, He has knowledge of the secret and the hidden.

God: There is no god but He. To Him belong the attributes most beautiful.

Has the story of Moses come to you?

When he saw a fire he said to his family: "You wait here. I have seen a fire. I may haply be able to bring an ember from it, or find direction by the fire."

When he approached it, a voice called out:

"O Moses, I am verily your Lord, so take off your shoes, for you are in the holy plain of Towa.