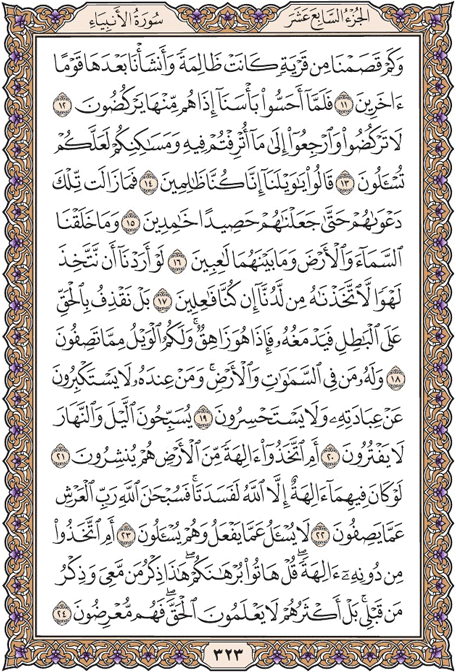 How many habitations that were sinful have We demolished utterly, and raised other people after them.

Whensoever they sensed Our punishment they fled from them.

"Do not flee; go back to your halls of pleasure and your habitations, so that you may be interrogated."

And this remained their lament till We mowed them down and made them extinct.

We have not created the heavens and the earth, and all that lies between them, out of fun.

If We had pleased to make a plaything We could have made it Ourself, if We had cared to do so.

In fact We strike the truth against the false, which shatters it, and it disappears. Woe to you for what you attribute (to Him)!

Whosoever is in the heavens and the earth belongs to Him; and those who are near Him do not disdain to worship Him or weary (of His service),

Nor cease to endeavour praising Him night and day.

Or have they taken gods from the earth who can raise the dead?

Had there been gods apart from God, both (the heavens and the earth) would have been despoiled. Much too glorious is God, the Lord of the mighty throne, for things they assert!