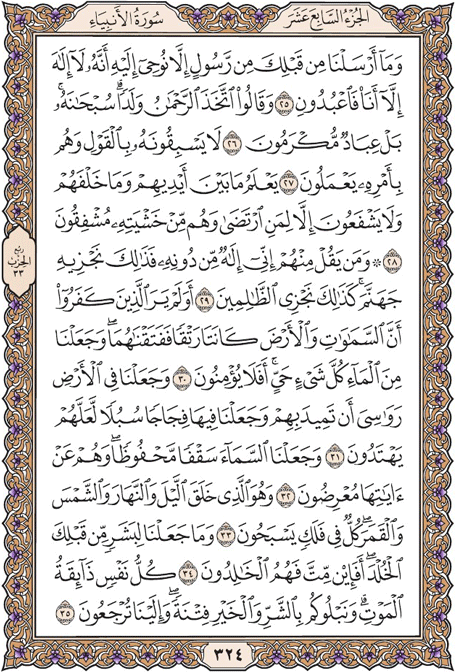 We have not sent an apostle before you without instructing him that there is no god but I, so worship Me.

And yet they say: "Ar-Rahman has begotten a son." Too exalted is He! In fact, those (they call His sons) were His honoured votaries.

They did not precede Him in their speech, and acted on His command.

He knows what was there before them and what came after them; and they did not intercede for any one but whom He willed, and they were filled with awe of Him.

If any one of them said: "I am God besides Him," We should award him Hell; for this is how We requite the evil-doers.

Do not these unbelievers see that the heavens and the earth were an integrated mass, then We split them and made every living thing from water? Will they not believe even then?

We placed stabilisers in the earth so that as it revolved with them you lived undisturbed; and We provided passageways between them so that men may find their way;

And We made the sky a well-protected roof. Still they turn away from His signs!

It is He who created night and day, the sun and the moon, revolving on its orbit.

We have given no man everlastingness before you. So then if you die, will they live ever after?

Every soul will know the taste of death. We tempt you with evil and with good as a trial; and to Us you will return.