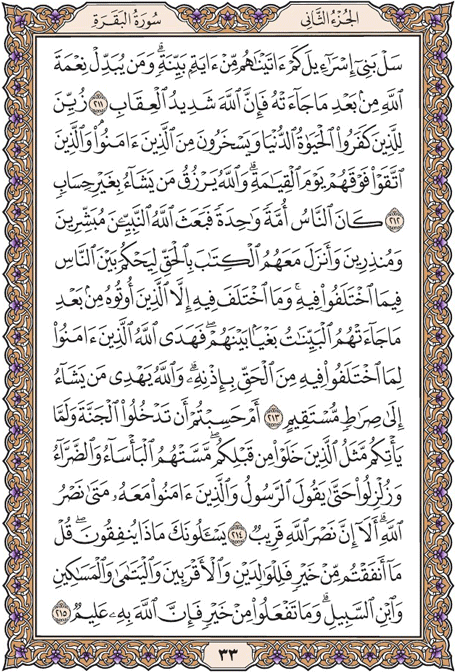 Ask the children of Israel how many a clear sign We had given them. But if one changes the favour of God after having received it, then remember, God is severe in revenge.

Enamoured are the unbelievers of the life of this world, and scoff at the faithful. But those who keep from evil and follow the straight path will have a higher place than they on the Day of Reckoning; for God gives in measure without number whomsoever He will.

Men belonged to a single community, and God sent them messengers to give them happy tidings and warnings, and sent the Book with them containing the truth to judge between them in matters of dispute; but only those who received it differed after receiving clear proofs, on account of waywardness (and jealousies) among them. Then God by His dispensation showed those who believed the way to the truth about which they were differing; for God shows whom He please the path that is straight.

Do you think you will find your way to Paradise even though you have not known what the others before you have gone through? They had suffered affliction and loss, and were shaken and tossed about so that even the Apostle had to cry out with his followers: "When will the help of God arrive?" Remember, the help of God is ever at hand.

They ask you of what they should give in charity. Tell them: "What you can spare of your wealth as should benefit the parents, the relatives, the orphans, the needy, the wayfarers, for God is not unaware of the good deeds that you do."