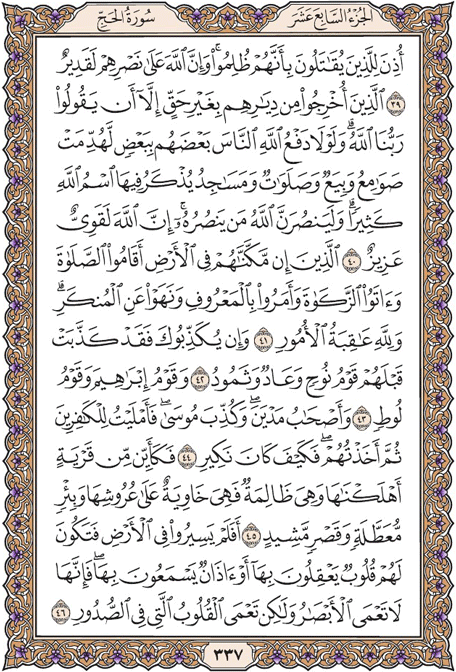 Permission is granted those (to take up arms) who fight because they were oppressed. God is certainly able to give help to those

Who were driven away from their homes for no other reason than they said: "Our Lord is God." And if God had not restrained some men through some others, monastries, churches, synagogues and mosques, where the name of God is honoured most, would have been razed. God will surely help those who help Him, -- verily God is all-powerful and all-mighty, --

Those who would be firm in devotion, give zakat, and enjoin what is good and forbid what is wrong, if We gave them authority in the land. But the resultance of things rests with God.

If they accuse you of falsehood, (remember that) the people of Noah, 'Ad and Thamud had accused (their apostles) before,

And the people of Abraham and Lot,

And the people of Midian too. Moses was also accused of lies. So I allowed the infidels respite and then seized them. How was My reprobation then!

How many a habitation given to wickedness have We destroyed, whose roofs tumbled down, which fell into ruins. How many a well and fortress reinforced lie abandoned!

Have they not travelled in the land that they could have the heart to understand, and ears to hear? It is not the eyes alone that do not see, oblivious are the hearts within their breasts.