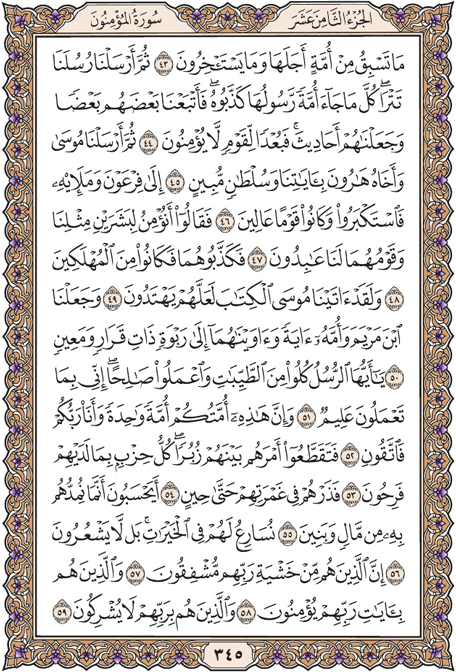 No nation can live beyond its allotted time, or lag behind.

Then We sent Our apostles one after the other. Every time an apostle came to a people they denied him. So We made one follow the other (to its doom), and turned them into bygone tales. Cursed be the people who do not believe!

To Pharaoh and his nobles who behaved with arrogance, for they were a conceited lot,

And said: "Should we believe in two men like yourselves, whose people are our subjects?"

Then they accused them of lies, and joined the company of those who were destroyed.

And We gave the Book to Moses so that they may be guided.

And We made the son of Mary and his mother a sign, and gave them shelter on an elevated ground, sequestered, watered by a spring.

Verily this your order is one order, and I am your Lord, so fear Me.

But then they divided up their order into different creeds, each section rejoicing in what it had come to have.

So leave them to their ignorance for a time.

Do they think that by increasing their wealth and children

We are hastening to reward them for good deeds? No. They do not comprehend.

Surely those who live in awe of their Lord,

Who believe in their Lord's revelations,

Who do not associate any one with their Lord,