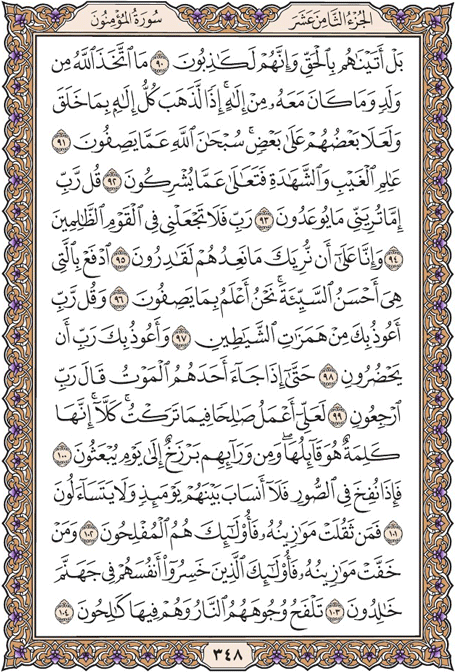 In fact We have sent the truth to them, but they are liars.

God has not begotten a son, nor is there any god besides Him. Had this been so, each god would have taken away what he had created with him, and some would have risen over the others. God is much too glorious for what they attribute (to Him)!

The knower of the absent and the present, too exalted is He for what they associate (with Him)!

Say: "O Lord, if I am made to see what has been promised them,

Then do not, O Lord, put me among the sinners."

We have certainly the power to make you see what We have promised them.

Dispel evil with what is good. We know well what they attribute (to Us).

Say: "My Lord, I seek refuge in You from the evil promptings of the devils.

I seek refuge in You lest they come to me."

(But the unbelievers will persist) until when death comes to one of them he will say: "O Lord, send me back again

That I may do some good I did not do (in the world)." Not so. These are only words he utters. Behind them lies the intervening barrier (stretching) to the day of their resurrection.

When the trumpet blast is sounded no ties of lineage will hold among them, nor will they ask after one another.

Only those whose scales are heavier in the balance will find happiness.

But those whose scales are lighter will perish and abide in Hell for ever.

Their faces will be scorched by flames, and they will grin and scowl within it.