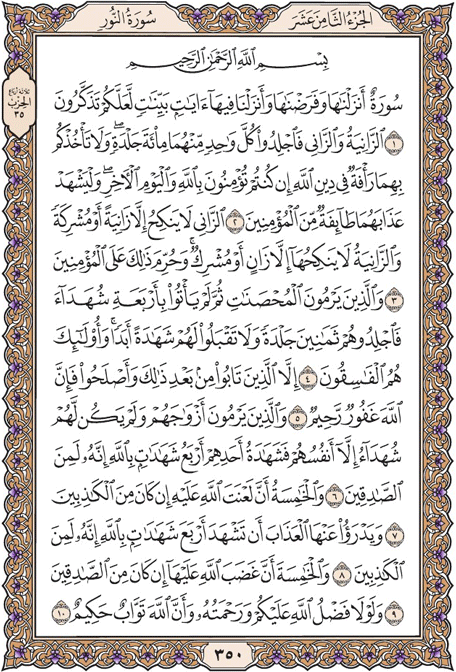 WE HAVE REVEALED this Surah and made it obligatory as We have sent down clear injunctions in it that you may be warned.

The adulteress and adulterer should be flogged a hundred lashes each, and no pity for them should deter you from the law of God, if you believe in God and the Last Day; and the punishment should be witnessed by a body of believers.

Those who defame chaste women and do not bring four witnesses should be punished with eighty lashes, and their testimony should not be accepted afterwards, for they are profligates,

Except those who repent after this and reform; and God is surely forgiving and kind.

Those who accuse their wives and do not have any witnesses except themselves, should swear four times in the name of God, the testimony of each such person being that he is speaking the truth,

And (swear) a fifth time that if he tell a lie the curse of God be on him.

The woman's punishment can be averted if she swears four times by God as testimony that her husband is a liar,

Her fifth oath being that the curse of God be on her if her husband should be speaking the truth.

(This would not have been possible) if the grace and benevolence of God were not upon you; but God is compassionate and wise.