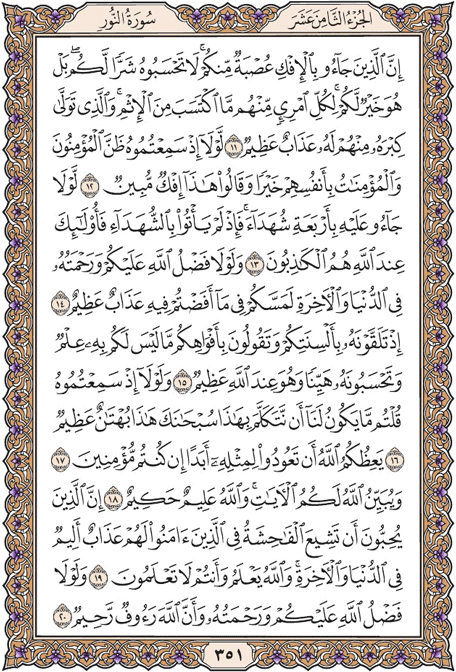 Those who spread lies were a clique among you. Do not think that it was bad for you: In fact it has been good for you. Each of them will pay for the sin he has committed, and he who had greater share (of guilt) will suffer grievous punishment.

Why did the faithful men and women not think well of their people when they heard this, and said: "This is a clear lie?"

Were it not for the grace of God and His mercy upon you in this world and the next, you would have suffered a great affliction for the false accusation.

When you talked about it and said what you did not know, and took it lightly -- though in the sight of God it was serious --

Why did you not say when you heard it: "It is not for us to speak of it? God preserve us, it is a great calumny!"

God counsels you not to do a thing like this, if you are believers.

God explains His commands to you clearly, for God is all-knowing and all-wise.

There is painful punishment in this world and the next for those who like that immorality should spread among the believers, for God knows and you do not know.

But for the grace of God and His mercy (much harm would have been done); yet God is compassionate and kind.