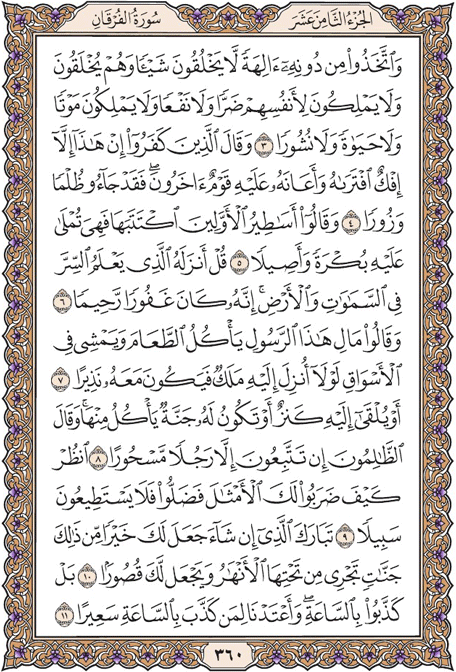 Yet they choose apart from Him gods who have not created any thing and have themselves been created, who possess no power over their loss or gain, or their death or life or being raised to life again.

Yet the unbelievers say: "This is nothing but a lie he has concocted in which others have aided him." They have come down to mischief and lies.

And they say: "These are fables of antiquity he has invented, which are dictated to him morning and evening."

Say: "He who knows the secrets of the heavens and the earth has revealed it to me; and He is surely forgiving and kind."

But they say: "What sort of prophet is this who eats food and walks the market places? Why was no angel sent to him to act as admonisher with him?

Or a treasure should have been given to him, or he should have had an orchard from which he could eat." And these wicked people say: "You only follow a man ensorcelled."

Just see what comparisons they bring up for you! They are lost and cannot find the way.

Blessed be He who, if He pleased, could give you better than that, -- gardens with rivers flowing by; and make palaces for you.

Yet they reject the Hour as untrue. We have prepared a Fire for those who deny the Resurrection.