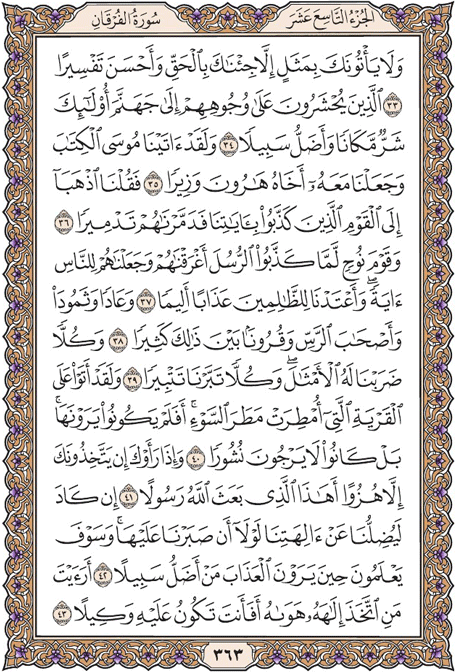 There is not an example they advance to which We do not give you a right answer and a better explanation.

Those who will be pushed faces forward into Hell will be in a worse position, farther away from the path.

We gave Moses the Book, and made his brother Aaron his minister,

Then We told them: "Go to the people who have rejected Our signs." Then We annihilated them completely.

We had drowned the people of Noah when they had accused the apostles of lies, and turned them into an example for men. We have prepared a painful punishment for the wicked.

(As for) 'Ad, Thamud and the people of ar-Rass, and many generations in between them,

We administered warnings to each of them, and then destroyed them completely.

They must have surely passed by the town on which We had rained the terrible rain of ruin. How could they not have seen it? Still they do not dread the Resurrection.

When they see you they take you only in jest: "Is this the one whom God has sent as messenger?

He would have surely turned us away from our gods if we had not adhered to them." They will know soon who is farther away from the path when they see the punishment!

Have you considered him who takes his own lust for his god? Can you stand a surety for him?