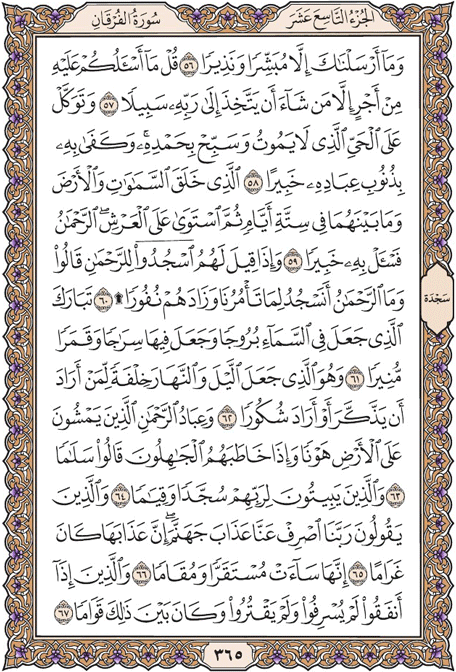 Yet We have not sent you but to give good tidings and to warn.

Tell them: "I do not ask any recompense of you for this other than (urging) whoever likes may take the way to his Lord."

Have trust in God the Living, who will never die, and sing His hallelujas; for He is well aware of the sins of His creatures.

He created the heavens and the earth and all that lies between them in six spans then assumed His authority. He is the benevolent: Ask those who are well-informed.

When you say to them: "Bow before Ar-Rahman," they say: "What is Ar-Rahman? Should we adore whoever you ask us to?" And their aversion increases further.

Blessed is He who placed in the heavens constellations of stars, and placed a burning lamp in it and the luminous moon.

It is He who made the night and day an alternation for him who cares to reflect and be grateful.

Devotees of Ar-Rahman are those who walk with humility on the earth, and when they are addressed by the ignorant, say: 'Peace;"

And those who spend their nights bowed and standing before their Lord;

Who say: "O our Lord, avert from us the torment of Hell: Its punishment is surely continuous.

It is indeed an evil halt and an evil abode;"

Who are neither prodigal nor miserly in their spending but follow a middle path;