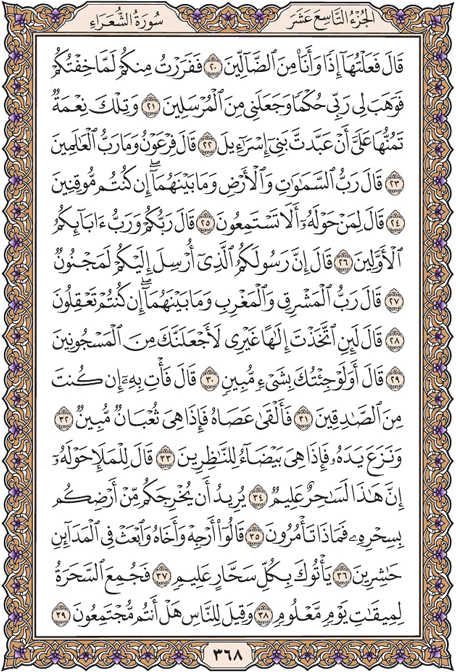 (Moses) replied: "I did do that and I was in the wrong,

So I ran away from you out of fear. But my Lord has given me wisdom, and made me an apostle.

But the favour you oblige me with is that you have enslaved the children of Israel."

The Pharaoh asked: "And what is the Lord of all the worlds?"

(Moses) said: "The Lord of the heavens and the earth and all that lies between them, if you can believe."

(The Pharaoh) said to those around him: "Do you hear?"

(Moses continued): "Your Lord and the Lord of your fathers before you."

(The Pharaoh) said (to his nobles): "Your apostle who has been sent to you, is certainly mad."

(The Pharaoh) said: "If you took another god apart from me I will have you incarcerated."

(Moses) said: "Even though I have brought to you something convincing?"

(The Pharaoh) said: "Then bring it, if you speak the truth."

So (Moses) cast his staff, and lo, it turned into a living serpent.

And he drew forth his hand, and lo, it looked white to the beholders.

The Pharaoh said to the chiefs around him: "He is certainly a clever magician.

He wants to drive you out of your land by his magic. So, what do you bid?"

They said: "Put him and his brother off awhile, and send summoners to the cities to gather

And bring the ablest magicians to you."

So the magicians were assembled at a stated time and place on an appointed day.

And the people were also asked to assemble.