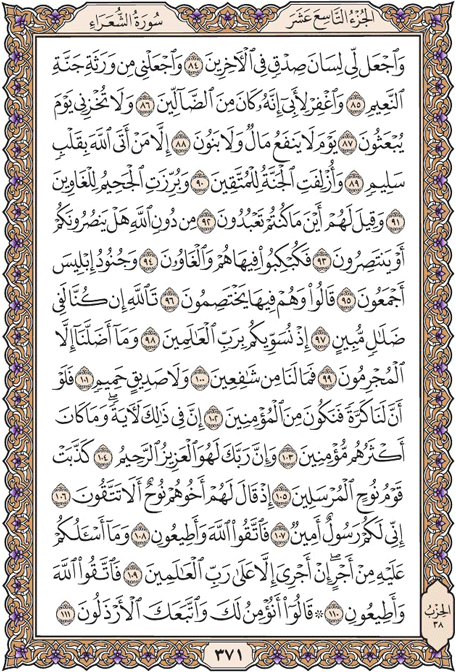 And uphold my name with posterity,

And put me among the inheritors of Paradise.

Forgive me and my father: He was surely among those who went astray.

And do not disgrace me on the day when they are raised from the graves,

But to him who comes to God with a tranquil heart."

Paradise will be brought near those who take heed for themselves and follow the straight path;

And Hell made visible to those who had gone astray.

They will be asked: "Where are those you worshipped

Other than God? Can they save you or even save themselves?"

Together with the hordes of Iblis.

Disputing among themselves they will say:

"By God, we were plainly in error

In equating you with the Lord of all the worlds;

No one but the sinners led us astray.

Now we have none to intercede for us,

Nor any sincere friend.

If only we could return and be among the believers!"

Verily there is a sign in this, but many of them do not believe.

Verily your Lord is mighty and merciful.

The people of Noah accused the apostles of lies.

When their brother Noah said to them: "Will you not take heed?

I have been sent as a trusted messenger to you.

So be fearful of God and listen to me.

I ask no recompense of you for it. My reward is due from none but the Lord of all the worlds.

They said: "Should we place our trust in you when only the condemned follow you?"