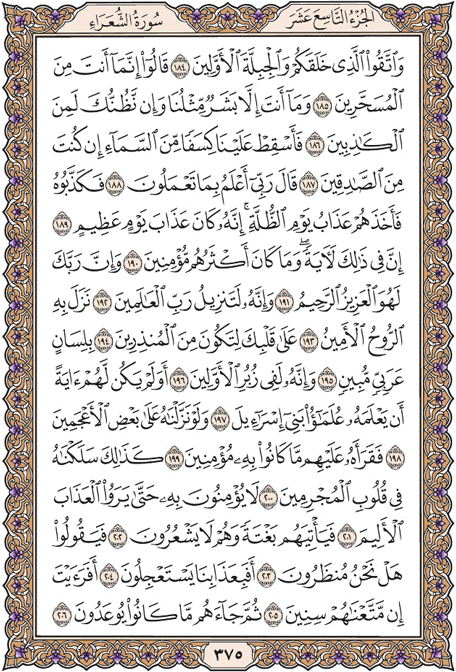 And fear Him who created you and all the earlier people."

They said: "Surely you are deluded.

You are nothing but a man like us, and we think you are a liar.

But in case you are speaking the truth, then make a segment of the sky to fall upon us."

(Shu'aib) said: "My Lord knows well what you are doing."

But they denied him, and We seized them with the torment of the Day of Shadowing (when the cloud had rained down fire). It was indeed the torment of a terrible day!

Verily in this was a sign, but most of them do not believe.

Yet verily your Lord is mighty and merciful.

And this (Qur'an) is a revelation from the Lord of all the worlds,

Which the trusted spirit descended with

To (communicate) to your heart that you may be a warner

This is (indicated) in the Books of earlier people.

Was it not a proof for them that the learned men of Israel knew about this?

Had We revealed it to a man of obscure tongue

And he had recited it to them, and they had not believed (it would have been different).

Thus do We cause (unbelief) to enter the hearts of sinners.

They will not believe it until they behold the painful punishment.

It will come upon them unawares, and they will not comprehend it.

Then will they say: "Can we be given respite?"

Do they wish Us then to hasten the punishment?

Just think: If We let them enjoy (the good things of life) for a few years more,

And then what they were promised comes upon them,