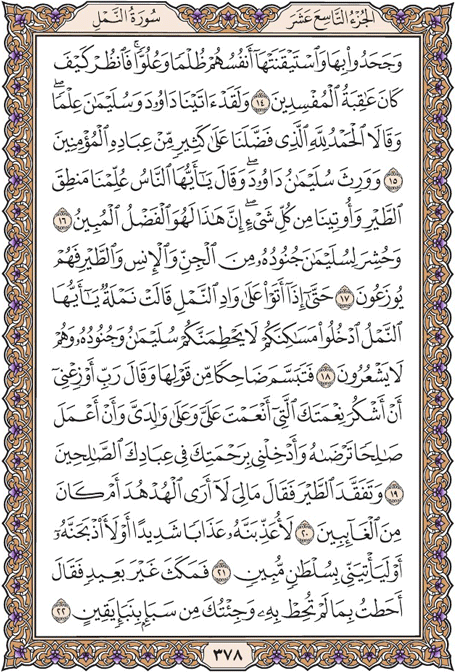 And they denied them out of malice and pride, though in their hearts they believed that they were true. So see how was the end of evil-doers!

We gave David and Solomon knowledge; and they said: "All praise be to God who has favoured us over many of His creatures who believe."

Solomon was heir to David, and he said: "O people, we have been taught the language of Tair, and have been given of everything. This is a clear favour indeed."

His armies of jinns and men and Tair assembled, formed into ranks, (and marched)

Till they reached the Valley of Naml. Said the lady of Naml: "O Naml, go into your dwellings lest Solomon and his hordes should crush you unawares."

(Solomon) smiled, amused at her speech, and said: "O Lord grant me that I should be grateful for the favours You have bestowed on me and my parents, and do good things of Your pleasing; and admit me among Your righteous devotees by Your grace."

When he reviewed the Tair, he said: "How is it I do not see Hud-hud? Is he absent?

I will punish him severely, or cut his throat, unless he bring a valid excuse."

But he was not long in coming, and reported: "I have been around where you have not been. I come from Saba with positive news.