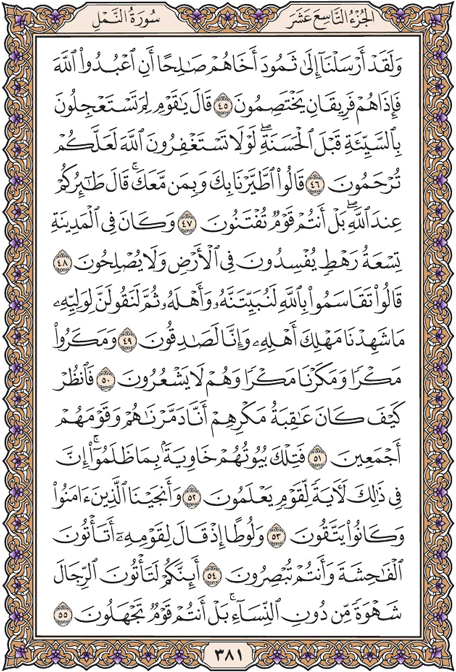 We sent to Thamud their brother Saleh (who said): "Worship God." But they were divided into two groups disputing with one another.

(Saleh) said: "O people, why do you wish to hasten evil rather than good? Why not ask for God's forgiveness? You may well be forgiven."

They said: "You betoken evil, and those with you." (Saleh) replied: "The evil you presage can only come from God. In reality you are a people under trial (for your own inauspiciousness)."

There were in that city nine persons who spread disorder in the land, and did not reform.

They said: "Let us swear by God that we will attack Saleh and his family at night, and later tell his heirs: 'We did not see his family destroyed, and we speak the truth.'"

They hatched up the plot; We also planned without their knowledge.

Now see the end of their machinations: We destroyed them and their entire people.

So these their habitations lie deserted now because of their iniquities. Verily there is a sign in this for those who understand.

We deliver those who believe and take heed for themselves.

(Remember) Lot, when he said to his people: "Why do you indulge in obscenities when you know (it is evil)?

You lust after men in place of women. You are indeed a stolid people."