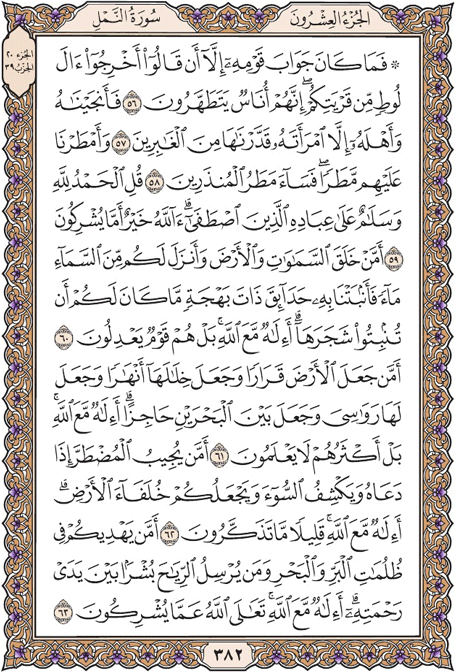 His people had no answer except saying: "Expel the family of Lot from your city. They are a people who would (rather) be pure!"

So We saved him and his family except his wife who was destined to stay behind.

And We rained down on them a shower (of stones). How ruinous was the rain that fell on those who had been warned (but warned in vain)!

Say: "All praise be to God, and peace on those of His creatures whom He has chosen." Is God better or those they associate with Him --

Who created the heavens and the earth, who sends down water from the sky for you, with which He causes graceful gardens to grow? It was not in your power to make trees germinate. Is there any other god along with God. In fact they are a people who turn away (from the truth).

Who then made the earth a habitable place, and made the rivers (flow) in its valleys and dales, and placed upon it firm stabilisers, and kept a barrier between two bodies of water? Is there any other god along with God? In reality most of them do not know.

Who hears the cry of the anguished (soul) when it calls to Him, and relieves its suffering? And who made you trustees on the earth? Is there any other god along with God? How little it is that you reflect!

Who then really shows you the way in the darkness of the desert and the sea? And who sends breezes bringing news of His benevolence? Is there any other god along with God? He is far too exalted for what they associate with Him!