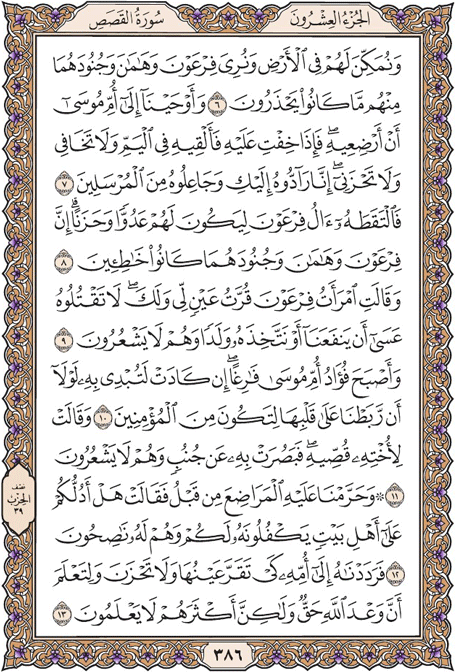 And establish them in the country; and to make the Pharaoh, Haman and their hordes beware of what they feared from them.

So We conveyed to the mother of Moses: "Suckle him. If you are afraid for him, cast him in the river without any fear or regret, for We shall restore him to you, and make him an apostle."

Then he was picked up by the family of Pharaoh (unaware) that he would become their enemy and a cause for regret. Surely the Pharaoh, Haman and their hordes were habitual sinners.

The Pharaoh's wife said: "He will be a comfort to me and to you. Do not kill him. He may well be of some advantage to us, or we may adopt him as a son." They were not aware (of what the future held in store).

The mother of Moses was perturbed in the morning. Had We not strengthened her heart to remain a believer she had almost given him away.

She told his sister: "Follow him." So she kept an eye on him from a distance, unbeknown to them.

We made (Moses) refuse a wet nurse. So his sister said: "Should I tell you of a household that could bring him up for you and take care of him?"

Thus We restored him to his mother that she may be tranquil and not grieve, and know that the promise of God is true, though most men do not know.