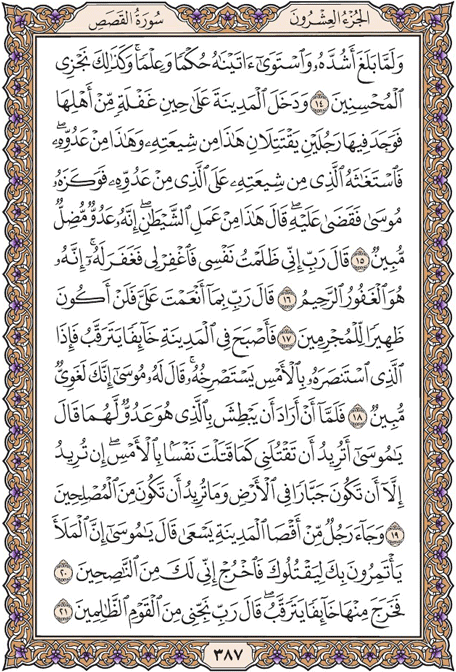 When he had grown up to full maturity, We gave him wisdom and knowledge. Thus do We recompense the doers of good.

He came to the city when the people were in a care-free mood, and saw two men quarrelling, one belonging to his community, the other to his enemies. The man who belonged to his community appealed for help against the one who belonged to the enemies. Moses struck him a blow with his fist and finished him off. "This is of Satan's doing," he said. "He is certainly an enemy and a corrupter."

"O Lord," he prayed, "I have done wrong, forgive me." And God forgave him. Verily He is forgiving and kind.

(Moses) said: "O Lord, as You have been gracious to me I will never aid the guilty."

In the morning he came to the city, fearful and hesitant. Just then he who had asked him for help the day before called out for help (again). "You are indeed a meddlesome fellow," Moses said to him.

Then as he was about to lay hands on the one who was their common enemy, he cried out: "O Moses, do you want to kill me as you killed that person yesterday? You only want to be a tyrant in the land and no peacemaker."

There came a man running from the other part of the city. "O Moses," he said, "the chiefs are deliberating to kill you. Go away from the city. I wish you well."

So he left the city, fearful and hesitant, (and) prayed: "O Lord, deliver me from these wicked people."