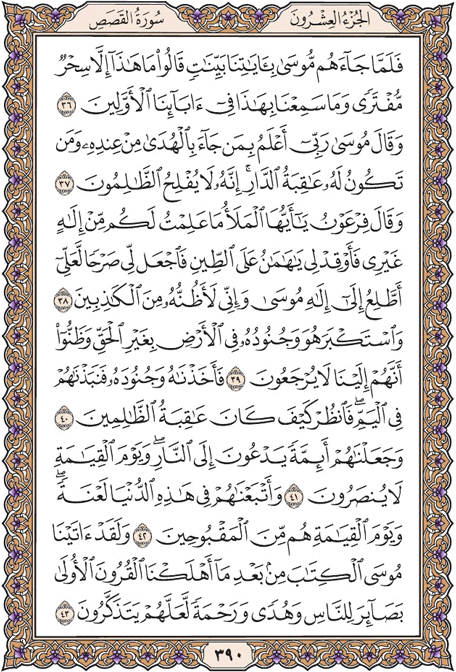 But when Moses came to them with Our clear signs they said: "This is nothing but magic he has contrived, for we have not heard of this from our fathers of old."

But Moses said: "My Lord knows well who has come with guidance from Him, and for whom is the guerdon of Paradise. But surely the wicked will not prosper."

The Pharaoh said: "O nobles, I am not aware of any other lord of yours but myself. So, O Haman, fire some clay (bricks) to build a tower for me that I may mount up (and see) the God of Moses; for I think he is a liar."

He and his soldiers had become arrogant in the land for no reason, and did not think that they have to come back to Us in the end.

So We seized him and his hordes and threw them into the sea. Behold then how was the end of the wicked!

We made them the leaders of those who call to Hell; and on the Day of Judgement they will not be helped.

A curse lies upon them in this world, and on the Day of Resurrection they will be despised.

After We had destroyed the earlier generations We gave Moses the Book as evidence for mankind, and a guidance and grace, so that they may remember.