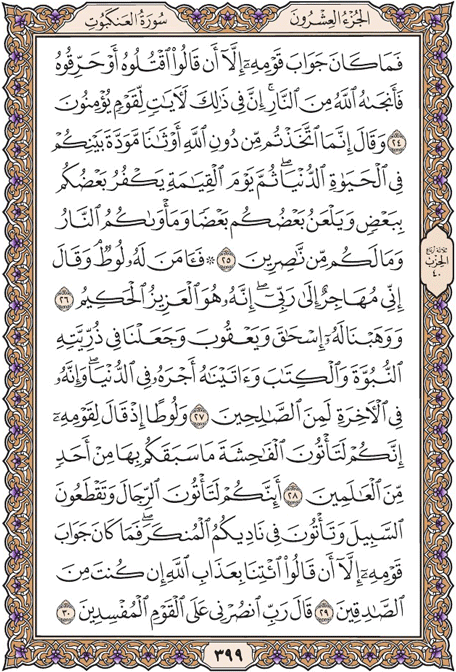 The people (of Abraham) had no answer except: "Kill him or burn him;" but God saved him from the fire. There are lessons in this for those who believe.

He said: "You have taken to idols through mutual affection in this life, in place of God, but on the Day of Resurrection you will disown and curse each other, and your abode will be Hell, and you will have none to help you."

Then Lot believed in him; and (Abraham) said: "I will separate myself and take refuge in my Lord. Surely He is all-mighty and all-wise."

So We bestowed on him Isaac and Jacob and gave his progeny prophethood and scripture, and rewarded him in this world, and in the next he will be among the upright.

And (remember) Lot when he said to his people: "You indulge in lecherous acts which none of the creatures had done before you.

You commit unnatural acts with men and cut off the way (of procreation), and commit obscenities in your gatherings." The only answer his people made was: "Bring the punishment of God, if you are truthful."

"O Lord, help me against the wicked people,"(Lot) prayed.