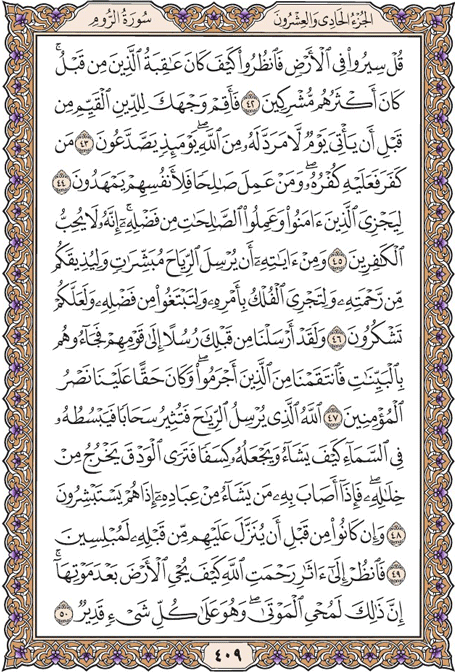 Say: "Travel on the earth and see how came the end of those before you." Most of them were idolaters.

So set your face towards the straight path before the day arrives from God which is irreversible. Men will be segregated on that day.

So that he who disbelieves will bear the consequence of his unbelief; and he who does the right will straighten out the way for himself,

So that God may reward those who believed and did what was good, by His grace. Surely He does not love unbelievers.

Among His signs are the breezes He sends as harbingers of happy news, so that He may allow you to taste of His mercy, and that ships may sail by His command, and you may seek of His bounty, and may haply be grateful.

Verily We sent many apostles before you to their people, who brought clear signs with them. Then We retributed those who were sinful. It is a duty incumbent on Us to help the believers.

It is God who sends the breezes that raise clouds, then spreads them over the sky as He please, fold on fold, then you see the drops of rain issue from between them. When He sends it down to those of His creatures as He will, they are filled with joy,

Although before it came down they were despondent.

So consider the signs of His benevolence: How He quickens the earth after it had become waste. He is verily the one who will raise the dead. He has power over everything.