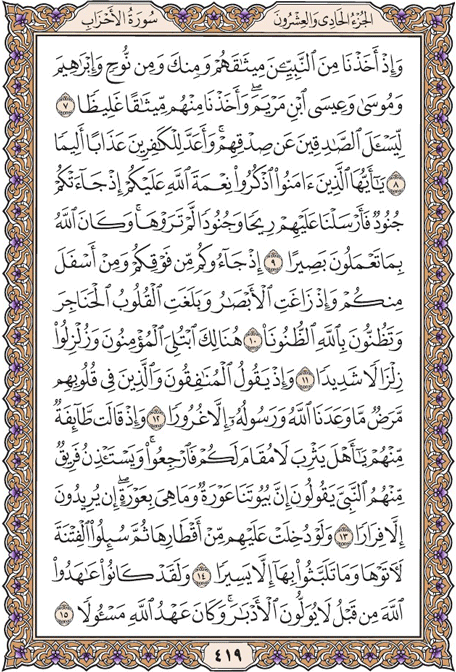 When We made the covenant with the prophets, and with you, as with Noah and Abraham, Moses and Jesus son of Mary, a binding covenant,

(It was) so that God may ask the truthful of their sincerity. As for the infidels, He has prepared a painful punishment for them.

O you who believe, remember the favours of God to you when an army came against you and We sent a wind against them and forces that you did not see. But God sees all that you do.

When they came upon you from above and below you, when the eyes were stupefied with horror, and hearts jumped to the throats, and you made wild suppositions about God.

The faithful were sorely tried there and were shaken completely,

When the hypocrites and those who were filled with doubt, said: "The promise of God and His Apostle was nothing but deceit."

When a section of them said: "O people of Yathrib, there is no place for you here, turn back;" and a section of them asked leave of the Prophet, saying: "Our homes lie exposed," -- while they were not exposed. Their only intention was to run away.

If the (enemy) had entered the city from every side and asked them to rise in revolt, they would have done so, and not hesitated but a little;

Whereas earlier they had made a promise to God that they would never turn their backs; and a promise made to God is answerable.