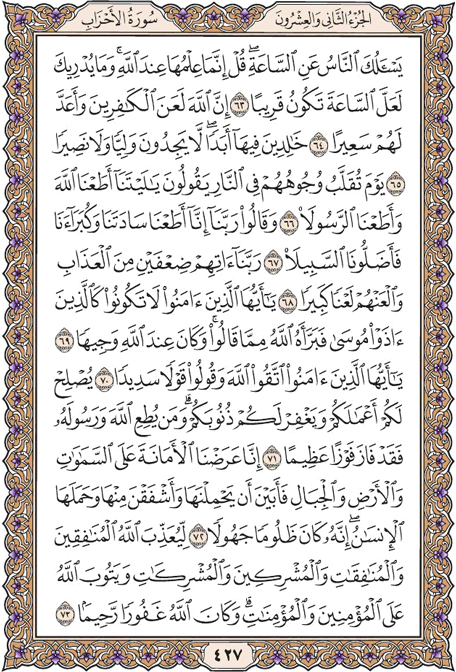 People ask you about the Hour (of the great change). Say: "Only God has knowledge of it. Who knows? The Hour may be close at hand."

Verily God has cursed the infidels, and prepared a blazing fire for them.

They will live in it for ever, and will find no saviour or helper.

The day their faces would be turned on the fire (as on a spit), they will say: "Alas! If only we had obeyed God, and obeyed the Prophet."

They will say: "O our Lord, we obeyed our leaders and the elders, but they only led us astray.

O Lord, give them a double punishment, and put a grievous curse upon them."

O you who believe, do not be like those who maligned Moses, whilst God cleared him of what they alleged; and he was held in high esteem with God.

O you who believe, obey the commands of God, and say straightforward things

That He may straighten your affairs for you and forgive your sins; and he who obeys God and His Prophet will be successful.

We had offered the Trust (of divine responsibilities) to the heavens, the earth, the mountains, but they refrained from bearing the burden and were frightened of it; but man took it on himself. He is a faithless ignoramus.

So that God punishes men and women hypocrites, the idolaters and idolatrous women, but He turns to faithful men and women in forgiveness, for God is forgiving and kind.