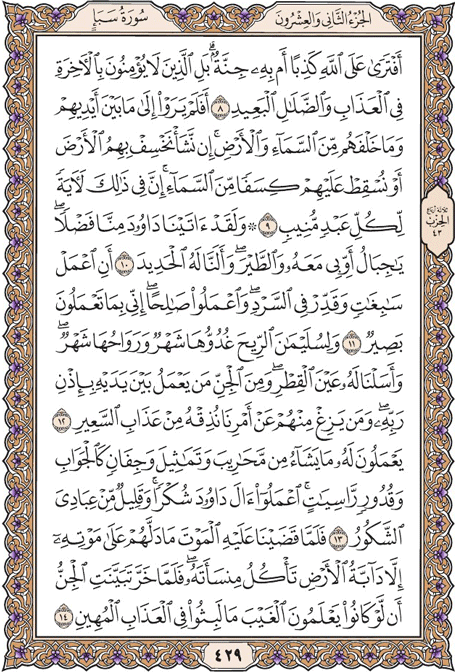 Has he fabricated a lie about God, or is he possessed?" Not so; but those who believe not in the Hereafter are themselves afflicted and far astray.

Do they not see what is before them and what is behind them of the heavens and the earth? We could cleave the earth and sink them, if We pleased, or drop a fragment of the sky upon them. There is surely a sign in this for every penitent creature.

We favoured David with excellence, (and commanded): "O Jibal and Tair, glorify the greatness of God with him." And We made iron pliable for him.

"Make long coats of mail," (We said), "and fix their links, and do the right. I surely see whatsoever you do."

We (subjugated) the wind to Solomon. Its morning's journey took one month, and the evening's one month. We made a spring of molten brass to flow for him; and many jinns laboured for him by the will of his Lord. Anyone of them who turned from Our command was made to taste the torment of blazing fire.

They made for him whatever he wished, synagogues and statues, dishes large as water-troughs, and cauldrons firmly fixed (on ovens; and We said): "O House of David, act, and give thanks." But few among My creatures are thankful.

When We ordained (Solomon's) death, none but the weevil, that was eating away his staff (on which he rested), pointed out to them that he was dead. When he fell down (dead) the jinns realised that if they had knowledge of the Unknown they would never have suffered demeaning labour.