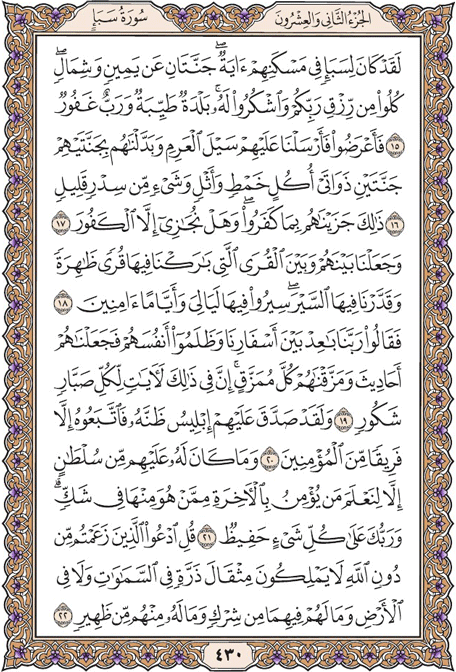 There was a sign for the people of Saba in their habitations: Two gardens, on the right and left. (And they were told:) "Eat of what your Lord has given you and be thankful. Fair is your land, and forgiving your Lord."

But they turned away. So We let loose on them the inundation of (the dyke of) al-'Arim, replacing their gardens with two other gardens which bore only bitter gourd, and tamarisks and a few sparse lote-trees.

That is how We requited them for their ingratitude. We only punish those who are ungrateful.

Between them and the cities We had blessed We placed towns along the highway, and made them stages on their journey, (saying): "Travel between them in safety by day or by night."

But they said: "O Lord, make the distance between the stages of our journeys longer;" but (by doing so) they wronged themselves. So We turned them into bygone tales, and dispersed them, scattered in all directions. Surely there are signs in this for those who endeavour and are grateful.

Thus Iblis found his supposition about them to be true; and except for a section of believers they follow him.

He had no authority over them save for the purpose of Our knowing who believed in the world to come, and who doubted it. For your Lord keeps a watch over everything.

Say: "Call on those you imagine are gods apart from God. They are not masters even of an atom's weight in the heavens and the earth, nor do they have a share in them, nor is any one of them a helper (of God).