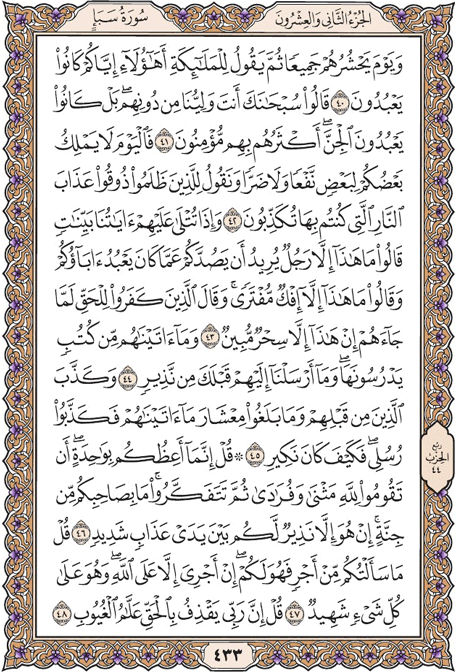 The day He will gather all of them together, He will ask the angels: "Did they worship you?"

"God forbid!" (they will answer). "You are our protector not they. In fact, they worshipped the devils. Most of them believed in them."

That day you will have no power to profit or harm each other; and We shall say to the sinners: "Taste the punishment of Fire which you had denied."

We did not give them any scripture to study, nor sent any warner before you.

Those before them had also denied, and they could not reach a tenth of (the possibilities) We had given them, and still they called My apostles liars. How great was the change that I wrought in their condition then!

Say: "I urge upon you only one thing: Stand up for God two by two or one by one, and think and reflect!" There is no madness about your companion. He is a warner against the dreadful affliction (that awaits).

Say: "The reward I ask is for yourself. My reward is due from none but God; and He is witness over everything."

Say: "My Lord casts the truth: He is the knower of things unknown."