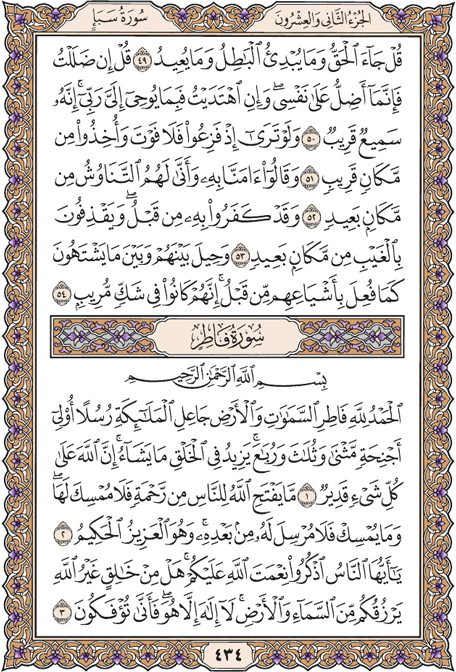 Say: "The truth has come, and falsehood had neither precedence nor will reappear."

Say: "If I am in error it is to my own loss; if I am on guidance that is so because of what my Lord reveals to me. He is all-hearing and all-too-near."

If you could see when they are gripped by terror without any escape, and are seized from close at hand

They will say: "We believe in it." How could they reach it from a place of no return?

They had surely denied it before and aimed without seeing from so far away.

A barrier shall be raised between them and what they desired, as was done with their partisans before. They too were filled with disquieting doubt.

ALL PRAISE BE to God, the originator of the heavens and the earth, who appointed angels as His messengers, with wings, two, three and four. He adds what He pleases to His creation. He has certainly power over everything.

There is none who can take away the favours He bestows on man; and there is none apart from Him to restore what He has withheld. He is all-mighty and all-wise.

O you people, remember the favours of God to you. Is there any creator other than God who gives you food from the heavens and the earth? There is no god but He: How then can you turn aside?