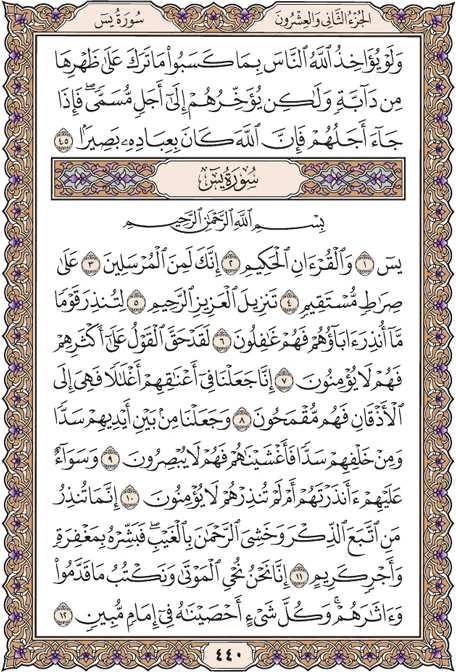 If God were to seize men for their doings, not a living being would be left upon the earth. But He gives them respite for a time ordained. When their time is come, surely God will keep (the interest of) His creatures in view.

I call to witness the Qur'an, custodian of all laws, --

That you are indeed one of those sent

On a path that is straight, --

A revelation from the mighty, ever-merciful (God),

That you may warn a people whose ancestors had never been warned, who are therefore heedless.

The sentence is surely justified against most of them, for they do not believe.

We will certainly put iron collars on their heel's which will come up to their chins, so that they will not be able to raise their heads.

And We shall raise a barrier in front of them and a barrier behind them, and cover them over so that they will not be able to see.

Whether you warn them or do not warn, it is all the same; they will not believe.

You can only warn him who listens to the warning and fears Ar-Rahman secretly. So give him good news of forgiveness and a generous reward.

It is We indeed who bring back the dead to life, and write down what they send ahead (of their deeds), and traces that they leave behind. We keep an account of all things in a lucid register.