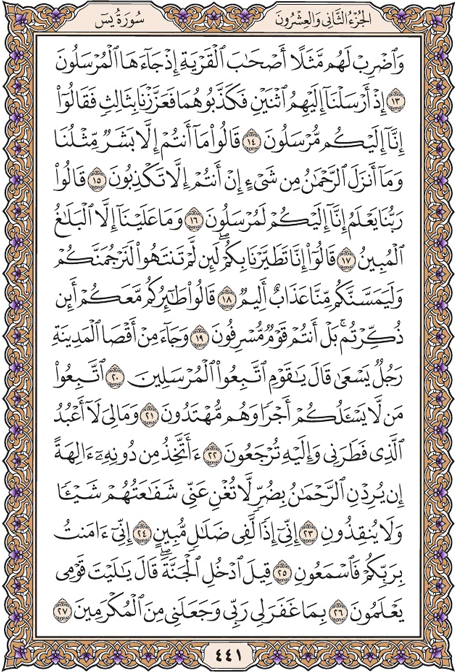 Narrate to them the example of the people of the city when the messengers came to it.

When We sent two of them they called them liars; so We sent a third to strengthen them. "We have been sent to you," they said.

"You are only men like us," they replied; "Ar-Rahman has not sent down any thing. You are speaking only lies."

(The messengers) said: "Our Lord knows that we have been sent to you.

Our duty is to convey the message clearly."

They rejoined: "We feel you augur ill. If you do not desist, we shall stone you to death, and inflict a grievous punishment on you."

(The messengers) said: "The augury is within your own selves. Do you (consider it a bad omen) that you should be warned? You are a people guilty of excess."

Then a man came running from the other side of the city. "O my people," he said, "follow the messengers.

Follow those who do not ask for any recompense of you, and are rightly guided.

Why should I not worship Him who brought me into being, to whom you will be brought back in the end?

Should I take other gods apart from Him, who would neither be able to intercede for me nor save me if Ar-Rahman brings me harm?

In that case I would surely be in clear error.

I believe in your Lord, so listen to me."

(But they stoned him to death.) It was said to him: "Enter Paradise;" and he said: "If only my people knew

How my Lord has forgiven me and made me one of those who are honoured!"